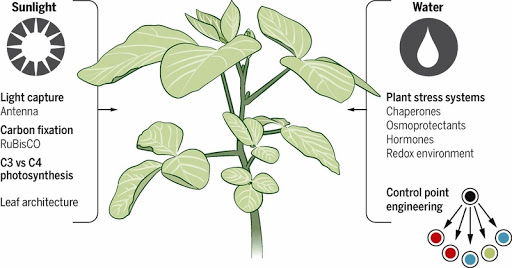 Irrigation of agricultural crops accounts for 70% of global fresh water consumption. Sustainable agriculture requires improved plant survival during short-term periods without water and more efficient water use. Although breeding has altered flowering time, height, and other traits that affect water use, the multigenic nature of plant drought responses and a lack of natural variability for crop drought tolerance have limited progress. Engineering plants for drought tolerance emphasizes the need for systems-level approaches that center on molecular control points with broad effects across multiple downstream targets.

In some regions of the world, such as the tropics, increasingly wetter climates with prolonged rainfall and severe floods affect farming with losses comparable with those from drought. In Asia, flooding affects rice with annual losses of $1 billion in areas dominated by smallholder farms. Waterlogged roots and submergence of aerial parts typically kill plants within a week; however, adaptations in certain rice cultivars allow for survival up to twice as long. QTL analysis identified submergence 1 (Sub1) as a mediator of stress-induced expression of ethylene-responsive transcriptional regulators in rice. As with drought, the search for submergence tolerance traits is identifying key control points in low-oxygen-sensing and -signaling pathways and regulators of pathways linked to flooding survival however, the extension of such knowledge from rice to other crops is just beginning.

Directly related to crop irrigation and coastal flooding is the problem of soil salinity or sodium toxicity. Crop irrigation increases salinity because of trace salts in water that accumulate over time. Saline soil conditions affect 7% of land, and nearly 30% of irrigated crops suffer from sodium contamination. The identification of the high-affinity potassium transporters (HKTs), which are selective for sodium and prevent accumulation of this toxic ion in leaves, provides a molecular mechanism for salt tolerance. Natural variation in HKTs is a resource for introducing salt tolerance into crops. Breeding of a wheat relative with a HKT gene into durum wheat produces a variety with reduced sodium in leaves and 25% higher grain yield on saline soils. Other pathways involved in salinity tolerance-including osmoprotectant synthesis, degradation of reactive oxygen species, and altered signaling systems-are also being explored for the breeding and engineering of plants that tolerate growth on saline soils. In addition to excluding contaminants such as sodium, plants can serve as environmental cleanup tools.